“It’s not the prettiest game and I’m not the prettiest player,” read a sign that hung in the Saints’ locker room last Saturday night (January 18).  They were words that rang true as New York defeated the Buffalo Bandits, 19-16 in an ugly, hard-fought meeting in the second game of a home and home series.

The Saints, who dumped the Bandits 21-17 in their last match-up, jumped to an early lead only 1:42 into the game, but Bandit Darris Kilgour returned the favor setting the pace for a back and forth game of not only skill, but muscle.

“They came out very competitive,” said Saints midfielder Gordon Purdie who had a hat trick and two assists for the night.

In a game which the Saints expected to be rough, they saw Buffalo chip away at each lead they tried to build.  The score changed hands throughout the contest with both teams battling to tie each other eight times.

“We were fighting for every goal,” Purdie said.  “We hit a lot of pipes, but were the better team in the end.”

New York and Buffalo turned to fisticuffs after tensions ran high when Saints veteran forward Bobby Cook fell to a groin injury.  Following Cook’s aided exit from the game, the Saints play seemed to take a turn for the worst.

“We’re a very emotional team and to lose a great player like Bobby is tough,” said Purdie.  “We got down on ourselves, but our team is thoroughly committed and can only look to win next week against Baltimore.”

Only two games into the season, the Saints remain undefeated and had to prepare for the Bandits by simply bracing for a team that was looking to avenge an earlier loss.

“We expected a physical game,” Saints midfielder Mike Cummings said.  “Buffalo played a rough style, but we kept up with them.  Many times our backs were to the wall and we had to make a decision.  Thankfully, we responded well.”

According to Saints coach Bob Engelke, New York has to thank its scheduling for the early season meetings with Buffalo.

“The Bandits are going to beat a lot of teams down the road,” he said.  “We played the worst first half we’ve played so far.  We gave up too many unsettled goals, but we came back to win and I’m really happy.”

The Saints will now gear themselves for a trip to Maryland for an American Division match-up against the Baltimore Thunder this Saturday, January 25th.

The Thunder are 1-1, and will be looking to make up for a 20-13 thrashing at the hands of the 1991 MILL Champion Detroit Turbos.

“At 2-0, this game is very important to us,” Engelke said.  “Baltimore plays a different game from Buffalo.  They slow down their offense, but it won’t be hard for the Saints to adjust.”

Cummings feels the Saints can earn another victory if they take it one game at a time.  And teammate Rob Codignotto sees this meeting as maybe the biggest game yet for New York.

INJURY REPORT:    Initial word out of the locker room is that veteran Bobby Cook is suffering from a torn groin and may be out 2-3 weeks. 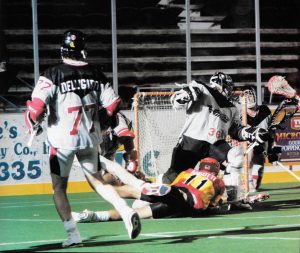 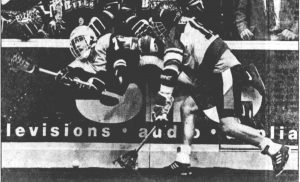 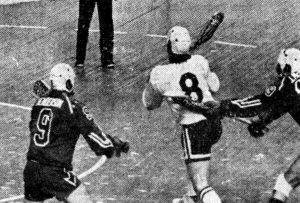