Skip to content
Home
/
Will Bulls’ marketing pay off tonight?

Will Bulls’ marketing pay off tonight?

The Civic Arean Corp. will begin finding out tonight whether the city is bullish on the Bulls.

The Pittsburgh Bulls of the Major Indoor Lacrosse League will make their local debut at 8 p.m., facing the New England Blazers at the Arena in the regular-season opener for both teams.

“Our thinking is that 6,000 is good for right now, but there’s no precedent or pattern here, so it’s hard to tell.  We’ve been selling a couple hundred tickets each day this week, and we think that’s good, too.”

What’s not good is the timing for the MILL opener.

“Traditionally, the week after New Year’s is a weak sales time because everybody is partied out and MasterCarded out,” Rooney said.

“And, naturally, we’ve been hurt by all the attention focused on the Steelers, even though we understand that and have no problem with it.”

“So for all those reasons,” said Rooney,” this will probably be the softest attendance for us this season.”

The Bulls’ other three home games will be on Saturday nights—Feb. 3 vs. Baltimore, March 3 vs. Philadelphia, and March 17 vs. Detroit.

“We’re hoping to sell an average of between 8,000 and 10,000 tickets so, obviously, we anticipate the three games doing much, much better than this one,” said Rooney.

“One of the interesting things will be to see what the walk-up sale is on game nights.  We have no way of telling.”

Rooney has been the prime mover to bring indoor lacrosse to the Arena.  Looking for new ways to fill open dates on the calendar, he gambled on a postseason exhibition last April 22 between New England and Detroit.  The attendance was almost 9,000, so Rooney pushed for an MILL team when an expansion franchise became available.

“But I think that with only four home games, the public will treat this like they would a rock ‘n’ roll concert.  It’ll be four separate events in their minds.”

NOTES—The Bulls’ Ernest Lichtfuss, 37, is believed to be the oldest rookie in sports right now…James Beardmore is due to start in goal against New England.  He is part of the Bulls’ two brother acts.  His brother Steve Beardmore, a forward, is not expected to play tonight.  The other brother combination is Mark and Joe Gold, a pair of forwards who will be in the lineup…The Bulls’ colors are—surprise, surprise—black and gold, and Butch Marino, expected to be one of the team’s top scorers, will wear No. 66 just like another high-scroring forward who plays at the Arena. 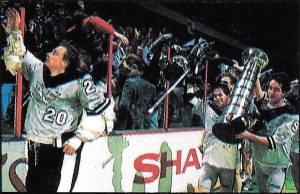 HOW ‘BOUT THEM WINGS? HOW’S IT FEEL? GREAT?

STICKING WITH IT– LACROSSE LEAGUE TRIES TO FIND ITS NICHE