Skip to content
Home
/
The Caribou are going big!

The Caribou are going big!

Gaylord Powless who has it in his blood ... and the rest of the team in great shape!

by Jacques ARTEAU of the Montreal Sun, April 12th 1975

DRUMMONDVILLE – There are five players of Indian origin, and unless a pale face is more impressive than one of their own, they will all be from the first edition of the Caribous presented to the public in Quebec on Monday, April 21, at the Colosseum.

Of these five, Gaylord Powless. Jim Miller. Russ George, Travis Cook and Ken Pougnier, the former is the leader. Not only because he was the sixth best meter in the National Lacrosse League last year, the best Indian player, but especially for his commanding character admiration and motivation.

In very characteristic features of his ethnicity, Gaylord Powless, not very talkative, suspicious at first glance, even suggests that he thinks he is another. Although he has several arguments in his quiver to justify such an attitude, especially by his talent as a natural player, his sense of team spirit however makes this first impression lie. 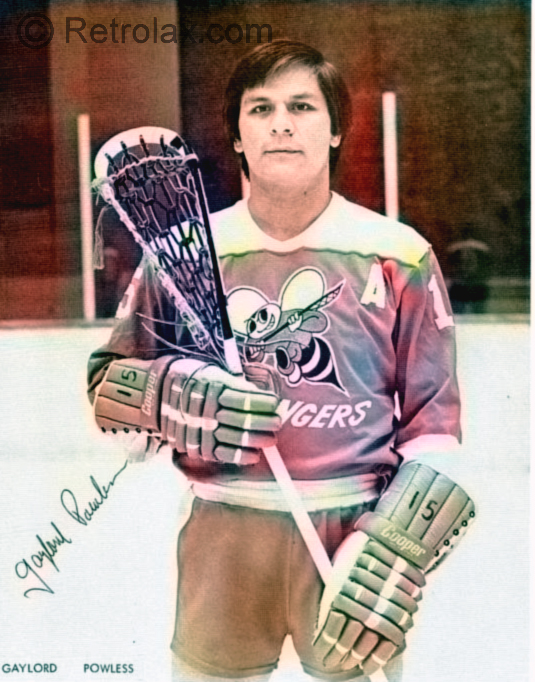 “I have been playing since I learned to walk. This is how all the young people on the reserve still learn to practice this sport,” explains the eldest of a family of 13 children, including eight boys. . “Two years ago, we built an arena on the reserve, thanks in part to a grant from the federal government, which helps a little more in the development of the youngest,” he adds regarding this recent community contribution from his Six Nations reserve at Hagersville, Ontario, to encourage greater participation in sports year-round on the reserve.

The only one of the five Indian players from a reserve installed in Canada, Gaylord Powless can especially boast of a prestigious heritage that his father left him. “My six other brothers play lacrosse, including Harry and Gary who are with Quebecers. “It is a family tradition, my father himself played long enough for this sport to become a family affair”.

His father is Ross Powless, a member of the Lacrosse Hall of Fame!

The 28-year-old forward and 24-year-old defender Russ George are from the Onondaga tribe of Lafayette. are the two closest to the learning acquired by Indian tradition. While they live mainly from lacrosse, the three other players of Indian origin have somewhat deviated from traditionalism to study. For one, 23-year-old defender Jim Miiler, who has already practiced amateur wrestling, is awaiting his degree in graphic arts from the Rochester Institute of Technology while forwards Travis Cook and Ken Fougnier had to leave on their side Caribou training to go to school exams in their respective hometown. 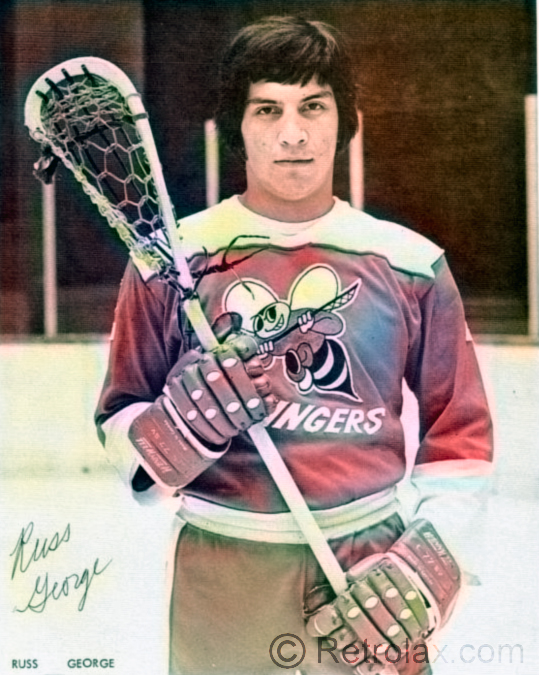 Gaylord Powless not only has an innate talent for lacrosse, he has also built a fairly good reputation as a center player with the Port Dover Intermediate Hockey Team. “I have been playing in senior and intermediate hockey for a few years, but this year lacrosse training has become too serious for me to continue playing, even if my club is currently in the finals,” he said. frowning as if he wanted to insist on this kind of self-discipline.

A long question to come about this innate talent conferred on the Indians, was skillfully bypassed by a Powless, who seemed alerted for quite some time by any signal or premonition.

“There are other players in this league who have acquired skill through work, effort, players who are as good as Indian players,” he said. He did not talk about the strength of the reflexes but others did it for him.

For about ten minutes, around forty players have been going from bottom to top and top to bottom, going up and down at a run, 33 steps separating the sections of the Civic Center of Drummondville. Out of breath, one of the performers is caught in the act for a brief pause which he immediately sees ordered: “Two more times again, two more madmen”.

This voice striking the four corners of the amphitheater is that of Chris Rudge, the right arm of the coach of the Caribou of Quebec.

“I do not know what Quebecers are doing in Baie-Comeau, and really I do not want to know. You can be sure that our guys will be in good shape,” says Medo Martinello, by whom the program, his Caribou’s training has been designed so that they will be the best physically prepared to start the next season, in the National Lacrosse League.

Certainly, if they had witnessed similar fitness sessions, the Nordic players and the Canadians would have been speechless.

These first two hours of training, which were preceded by a brutal awakening at six in the morning, for a race of three quarters of a mile, seem interminable for all the candidates without exception. With only twenty minutes of training, here is the last exercise ordered by Rudge relaunching everyone on the stairs, “up and down, up and down”.

Chris Rudge, 29, a graduate in physical education from the University of Toronto in 1909, is well placed to impose such an extensive fitness program. He participated in a dozen games with the Syracuse Stingers last season.

Hired last January by Medo Martinello, as director of caribou player staff, and chief scout for the team, he was finally given the role of drafting the fitness program, here at the Civic Center.

“We knew that lacrosse required special conditioning, but we went further. I myself am keen on fitness experiences, so I made arrangements with Medo to take advantage of the maximum possible conditioning on a three-week period, “says the English-born Toron-tois, whose parents moved to the country when he was five.

To apply an exercise plan according to the target, he surrounded himself with two physical educators from Drummondville, Gérard Lefaivre and Gilles GouleL “Our candidates will be assessed individually, our program is designed so that it can be continued In Quebec, at the physical education center of Laval University, during the season, “he said, confirming that an agreement had been concluded with the Peps of Laval University, as was the case for the Remparts of Quebec. 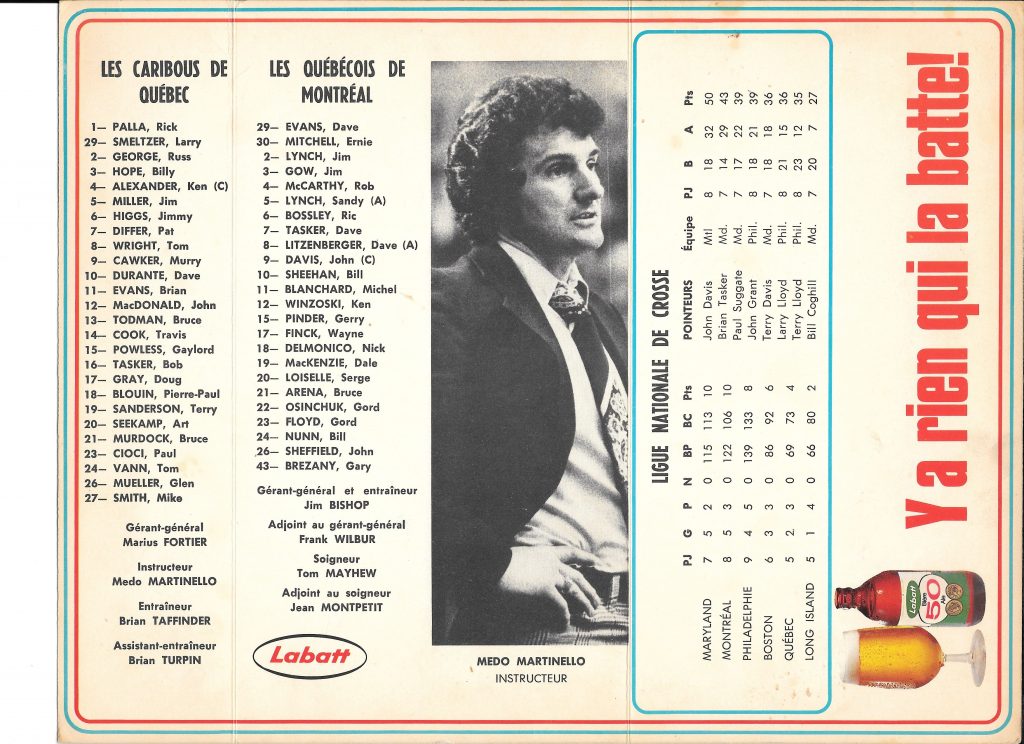 Having personally met the majority of the candidates individually shortly before the draft of the league, Rudge could already assess the conditioning of a good number even before the training period began. “Several of them did exercises before coming here, otherwise they would not have held up so well with what we imposed on them when they left,” he said.

While some were sweating profusely in endurance races, others challenged each other in a weightlifting competition, in a room under the stands. After ten days of training, Rudge only complicated, so to speak, the task of his boss, concluding with a certain pride, in a French which he mastered well: “It is not only individual effort, teamwork is quite remarkable at a training camp “

Medo Martinello has already convinced himself that Chris Rudge will give him a team in excellent physical condition for the first match on April 21 in Quebec.