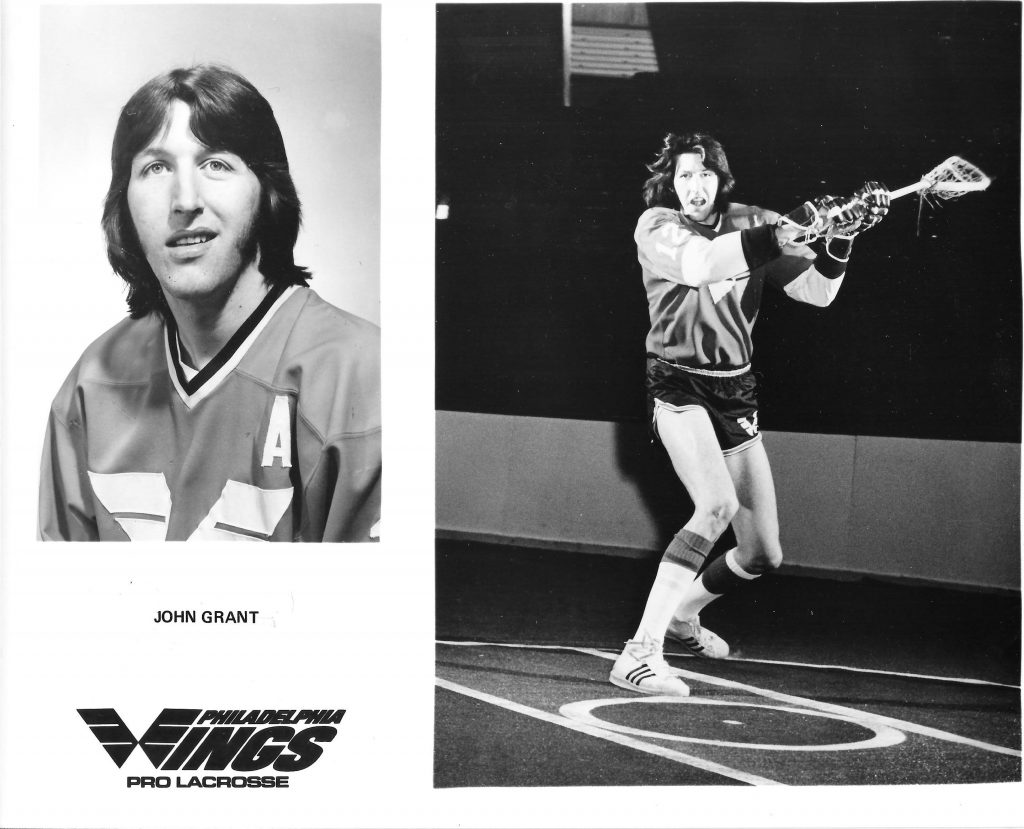 Professional lacrosse owes a lot to these men. Through the muggy, sweltering heat of summer, they pioneered the sport. Through the grueling 40+ game schedules, they prevailed. In an era, that put them thirty years ahead of their time, they became legends.

The year was 1974, and in South Philly, there was a buzz about town. The Flyers were about to win their first of two straight Stanley Cups, featuring the Broad St. Bullies. Bruce Springsteen played his first concert in Philly, at the old Spectrum. And the Philadelphia Wings, with the five other teams, hit the floor for the inaugural season of the National Lacrosse League.

“It was a special year, not only for us, but a majority of Canadians coming down here and playing box lacrosse.”, Wings super star John Grant Sr. said about the ’74 NLL. “But it was special also in this city as the Philadelphia Flyers were winning the Stanley Cup in ‘74 and ‘75, so this city was filled with excitement. We opened up against Montreal, right after the Flyers won their first Stanley.” 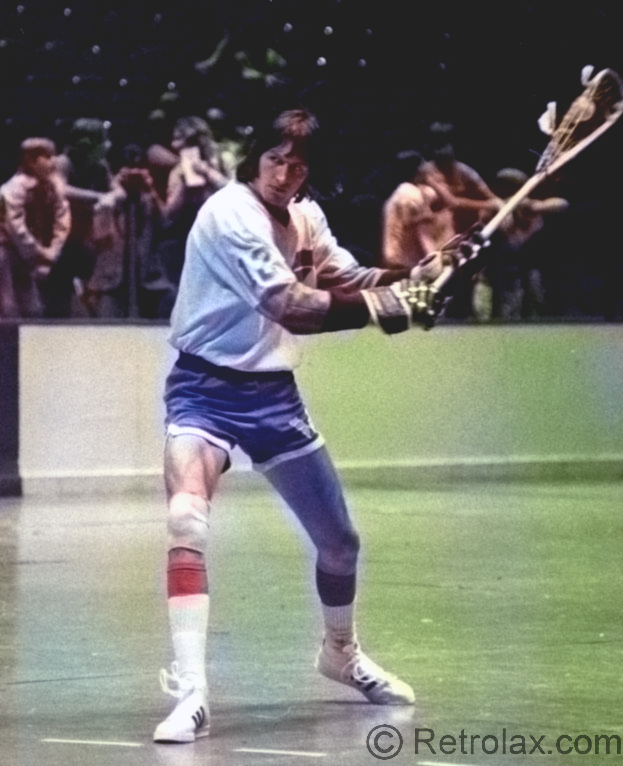 The 1974 NLL was a rough and tumble league. Wood sticks and open face helmets were the way to go back then. Men played both offense and defense, and took their lumps without the aid of protective padding. These guys were men, in the Conan the Barbarian sense of the word. They fought like gladiators, in arenas built for hockey, for little pay.

On March 13th (2004), the Philadelphia Wings honored these warriors of their era, by welcoming them back to Philly for the appropriately named “Old School Night”. Arranged by Dave Coleman, an expert on the 1974-’76 NLL and administrator of NLLLacrosse.com, John Grant, and 11 of his teammates made it to the Wachovia Center in South Philly. It was a magical evening, where today’s Wings fans, met yesterday’s Wings. Two eras were finally linked not just in the Wings name, but now in spirit. 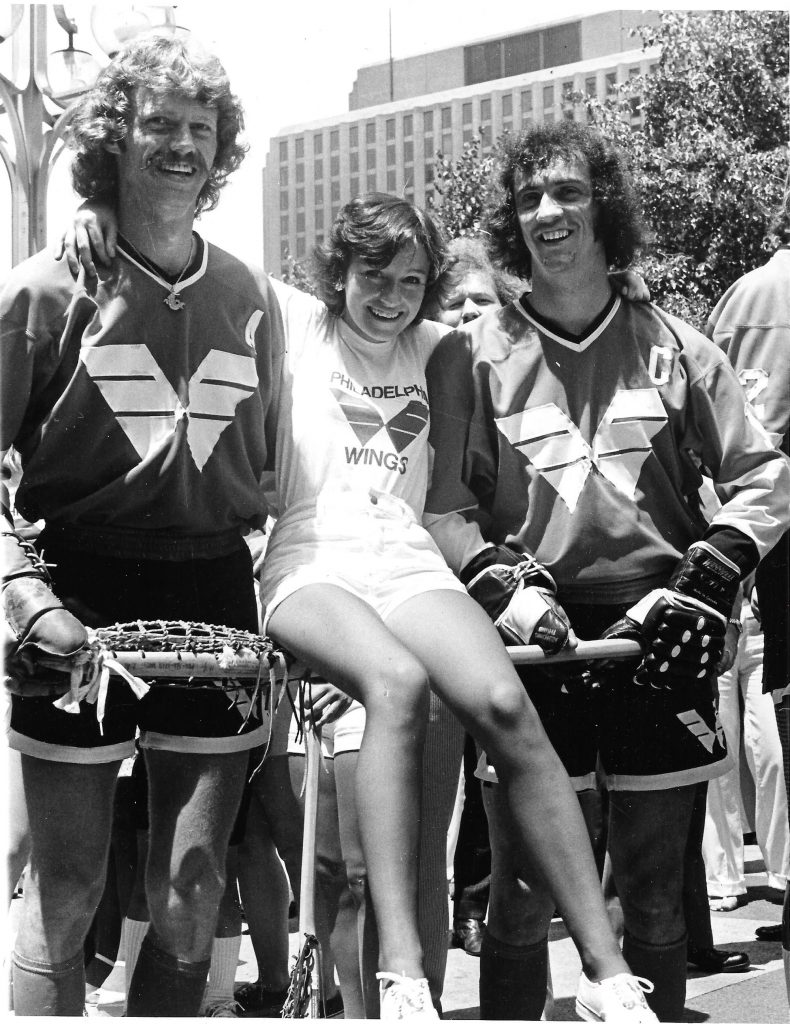 The history of that league is obscured in today’s world. Few NLL fans today are aware that the mid 70’s version even existed. Between the fatal 1976 season and the emergence of the Eagle Pro Box Lacrosse League in 1987, professional lacrosse was bound to the provinces of Canada. Even in the 1970’s, the attendance in some cities was impressive, like in Philly where they were drawing about 16,000 some nights. But the 40 game schedule proved to be too much for certain teams to handle. The mid 70’s NLL had the same trouble with team turnover as the present day NLL. The 74 champions, the Rochester Griffins, moved to Long Island, and became the Tomahawks. Some teams just disappeared, like the Syracuse Stingers. And still others found a way to keep going.

Philadelphia stayed the course, keeping its team until the league folded. Philly has always taken to professional box lacrosse. Something about the sport allures the locals. Until recently (within the last 10 years), lacrosse was something that was bound to the prep-schools in the area. Public schools did not participate in lacrosse, and it was almost impossible to find a box lacrosse league. Now, not only are public schools finding out that lacrosse is a popular sport amongst teens, but box lacrosse leagues are popping up in this area like wildfire. In some way, the Philadelphia Wings are responsible for the lacrosse renaissance, and if that is the case, then the 1974-76 Philadelphia Wings players are to thank. In fact, Philadelphia is the only city to have had a team with the same name, no matter what the professional box lacrosse league name was, no matter where any other teams were, no matter the situation.

The Wings have been a staple in professional box lacrosse, since what seems to be the beginning of time. But then again, so was the grueling schedule a professional lacrosse player needed to uphold. The mid 70’s NLL was not immune to this. Players on the Wings and other teams, held jobs outside of the league, to make ends meet. Many players hailed from Peterborough, in Ontario, Canada, and had to fly down to Philly, or wherever, just to play. Something that still plagues the NLL today, players had to figure out how to not just deal with lost weekends, but lost weeknights as well. Since the league ran games during the week, some players found themselves in quite a tight pinch trying to make it to games. 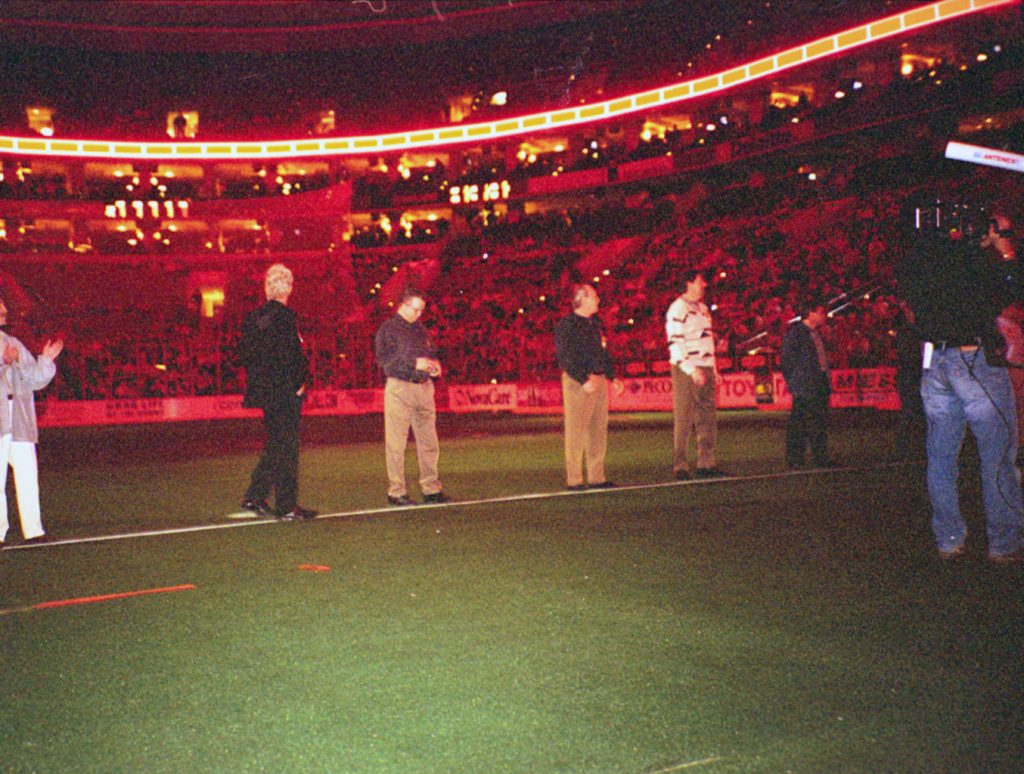 As Jim Vilneff, another 74 player, recalls, that situation posed some interesting cases. On game days, his schedule would be very cluttered. He would begin the day by fulfilling the requirements of his college courses. Sometime around 2-3 pm, he would run back to his dorm room, grab his game gear, and get shipped off to the airport, where he would catch a flight to Philly. From the Philadelphia airport, he would be shipped directly to the Spectrum, where he would catch his team at most only an hour before game time. Right after the game, he would hop back in a cab to the airport, where he’d take a flight home. The next morning, it was college as usual. Pretty intense for a night job in college.

“Traveling [was the hardest thing].”, John Grant said. “Then, the game and the violence…there were a lot of injuries.” For sure the NLL was not a friendly environment in terms of staying physically adept. A good hit by a wooden stick could knock you out of the game, or a crushing blow to the boards without a facemask could break your nose, yet again. Oh yeah, these guys were tough. 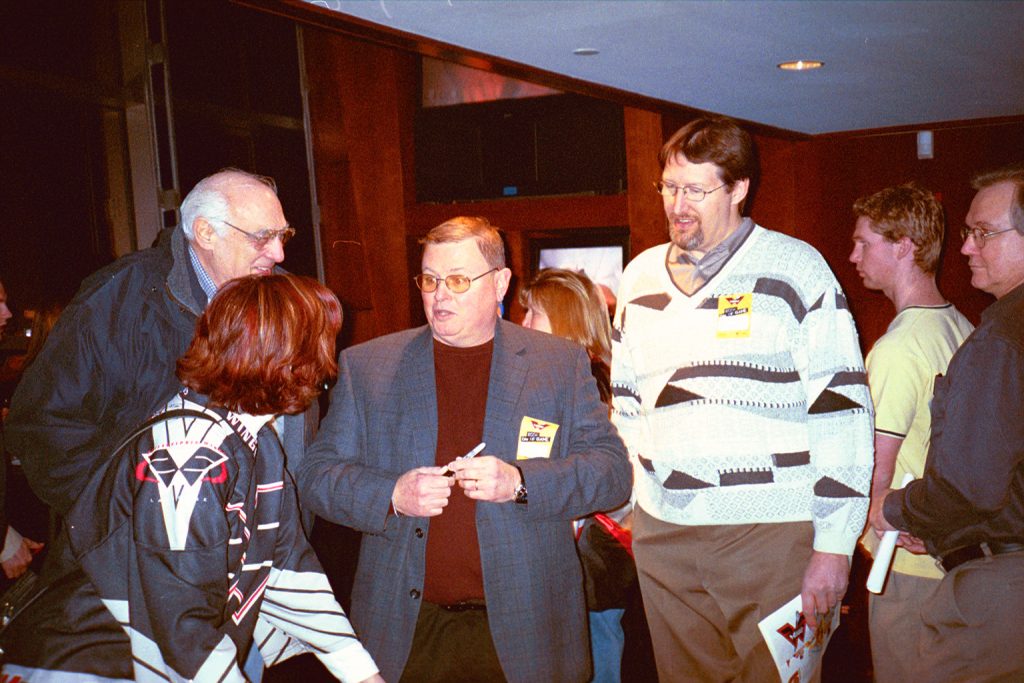 From all the stories told on March 13th, as the players stood around recalling events from times past, a thought crept into my mind. What if one of these tough guys could come back and coach a present day NLL team? What would happen? Would it be possible that someone would still have the interest?

“Oh yeah!”, John Grant exclaimed a question of whether or not he would like to coach in today’s NLL. “I coached at different levels, Junior A and Senior A.” John also went into what challenges he would have to meet as a coach today. With the NLL drafting from field lacrosse, coaches now a days need to be able to teach the hectic style of box lacrosse, in order to glean the most out of their rookie players. “A coach needs to know how to get a field lacrosse player to understand the game. As a box lacrosse player you need to keep moving your feet, or you’ll get beat. In box you have either a righty or a lefty, and they stay with their roles.” Field lacrosse, as John said, players tend to use both hands, and have trouble staying with just right or left sides. it’s the little things that differ between box and field, but those little things tend to make a huge difference when it comes to game time. 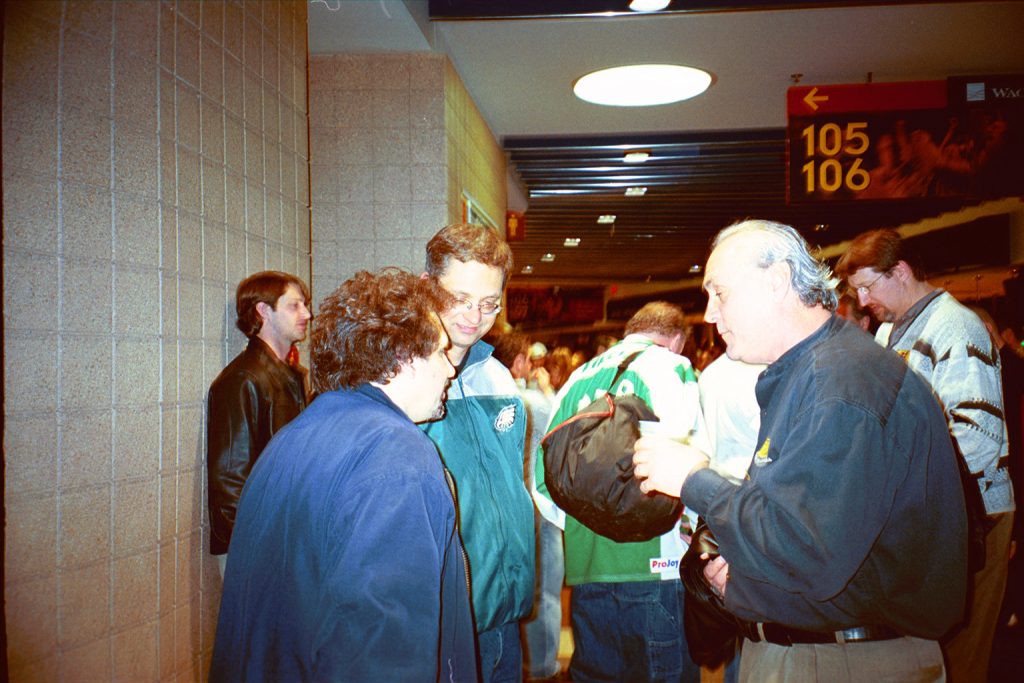 Offense and defense. While these terms were known to the mid 70’s NLL player, he was not bound to either one. In the 70’s, like in the early EPBLL and MILL (Major Indoor Lacrosse League) of the 80’s and 90’s, guys played both ways. “Minute men”, as they are affectionately known by some, play out one full offensive and defensive shift, and return to the bench area to allow the next line on. The 70’s guys may have a hard time parting with this method, if they were to coach in today’s NLL.

As the NLL moves to the lime-light, in terms of finally landing a national television deal with Fox SportsNet, it would be interesting to see how the average Joe fan would take to the rough and tumble style of one of these throwback players. Fans might not understand certain offensive or defensive strategies, or may become confused to see offensive players comfortably falling back on defense. Well that is, unless someone who understands this method, is in the booth.

“The play by play and color commentators are not doing a good job.”, Peter Guerin said. “They’re not educating the public, and I think they should have someone in the booth who’s more optimistic about the game, and can explain the game a little better to the public.” Peter, a former announcer for Junior A ball, expressed personal interest in calling games for Fox, or any covering affiliate. Taking from personal experience, Peter said the games should be called with a passion only matched by baseball. It’s a dream that all NLL fans have, seeing all their games, both home and away, on TV, with announcers who not only know the game, but also have a passion for their team, and know the players and the team inside and out. Peter’s vision is something that would transfer this sport from the grass roots charm to the mainstream sports world.

It took 30 years for people to completely appreciate what happened in the 1974 season. But to understand how these men pioneered the sport, all you would have to do is see it in their eyes when they reunited on the Wachovia Center floor. They smiled from ear to ear, as the Wings owners congratulated them on their stellar career, and the Wings fans erupted as the jumbo-tron showed highlights of the 1974 season. Their passion set forth the seed of success for professional indoor lacrosse. With all they did and all they strove for, 30 years later the NLL is stronger than ever, and is making the leap to bigger and better things. 30 years from now, the players today, who have changed the sport so much from the version played in 1974, will be remembered for how they pioneered the modern game. And with that thought, here’s to 30 more years!