Skip to content
Home
/
STICKING TO IT IN BOX LACROSSE…..

STICKING TO IT IN BOX LACROSSE….. 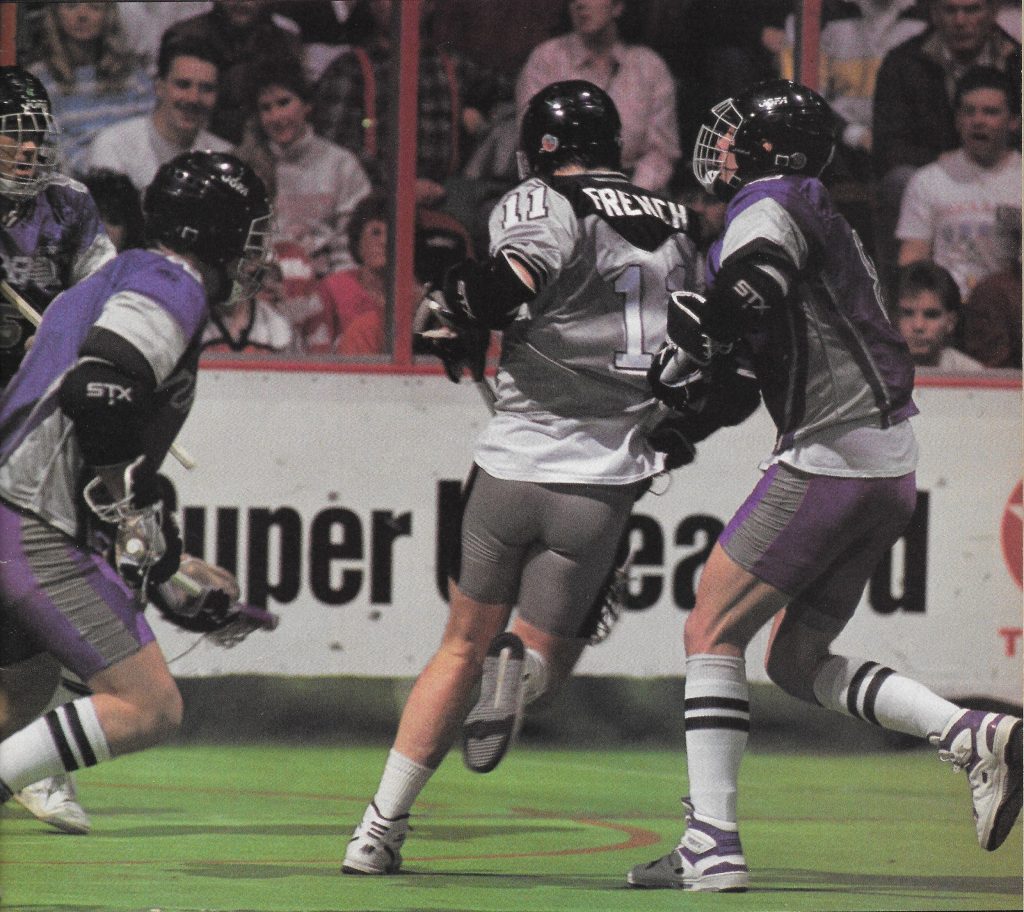 CHARLES A. JAFFE, The Morning Call

Philadelphia Wings of the Major Indoor Lacrosse League started their 1989 season back in November in the damp, dim snack bar at the Edgewood Athletic Center. Team officials – who brought with them beer, pretzels and potato chips – could barely be heard above the din from a local league game.

The gist of the conversation at the meeting was easy to grasp. The Edgewood Athletic Center is a long way from the Philadelphia Spectrum, and the assembled players were equally far away from making the team and playing in the big building before 15,000 screaming fans. A majority of these players would be cut.

Wings assistant coach and former player Mike Page, with a two-day growth of red beard and looking disheveled in a rumpled green sweater with the tails of a button-down hanging from the bottom, stood up and waited for a break in the noise of the game.

“A few things have changed for me since last season,” Page started telling his former teammates and new Wings hopefuls. “First, I got married. Then, I bought a house. Then, I lost my job. So I wouldn’t be here unless I really, really wanted to be. And you guys really have to want this too. You have to be committed to playing this game.”

Childhood dreams of being a professional athlete have almost nothing to do with the Major Indoor Lacrosse League (MILL). It is not fancy or, for the most part, glamorous. The salaries are low, there are limited benefits, long hours and many sacrifices. There is an ever-present potential for injury; bruises and stiffness are routine. Making the team means driving to practices after a full day’s work and surrendering nights and weekends to practices, games and road trips. 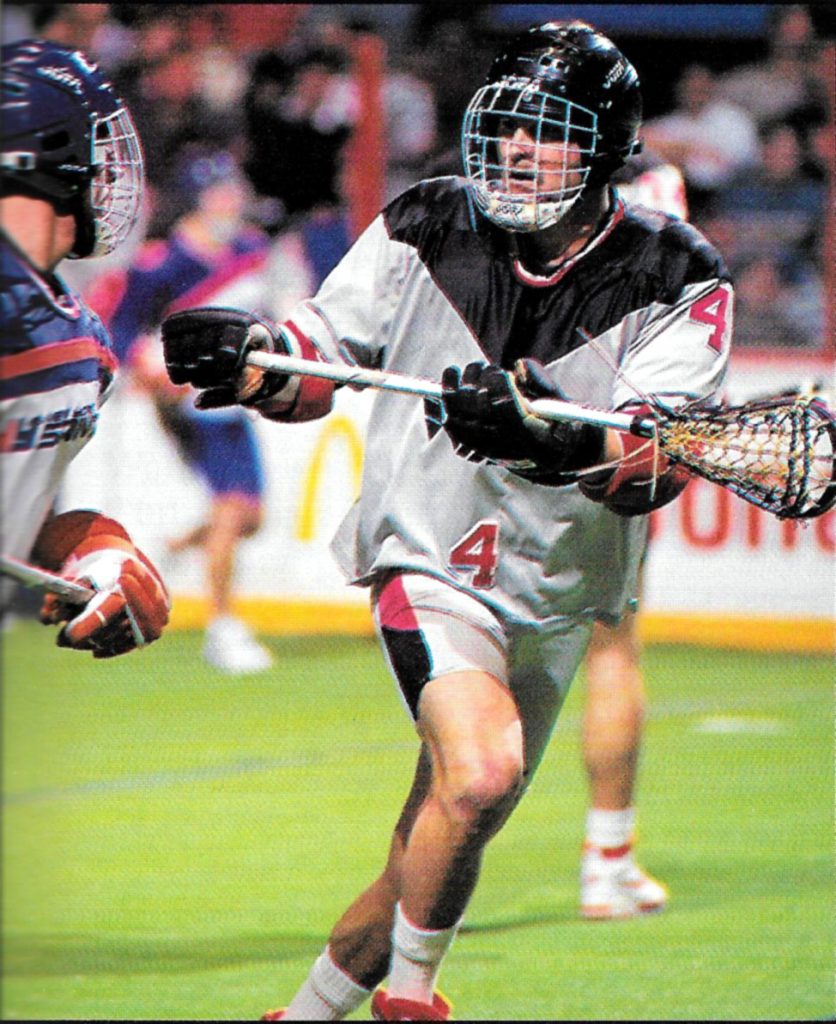 The cover of Sports Illustrated is out of the question. But there is the lure of the crowd – which averaged roughly 13,000 for the four games at the Spectrum last year – and the knowledge that, as the nation’s only professional lacrosse league, the MILL is the winter home to many of the nation’s best players.

The Major Indoor Lacrosse League is entering its third season, a year that many people around the league say is critical to its long-term survival. If it can’t make money in 1989, some people fear that the owners – a pair of Kansas City-based event promoters – may pack it in. The league is expanding from four to six teams this year, with squads in Baltimore, Washington, Boston, Detroit and on Long Island in addition to the Wings. The Wings open their season at the Spectrum on Jan. 14.

Philadelphia is the MILL’s most successful team at the turnstiles. The city’s hockey-crazed fans, drawn to the speed and hitting of the game, have supported box lacrosse as far back as the 1970s, when a professional box lacrosse league played two short, unsuccessful seasons in cities throughout the Northeast.

Box lacrosse itself is a distant cousin to the field lacrosse that most people are familiar with. The field version is the Native American game, called “baggataway” when it was played by the Indians in the 1600s. Various histories of the game say that a Jesuit missionary, keeping a diary of his travels in 1636, named the game lacrosse because the Indian sticks looked like a bishop’s crozier. Most players in the MILL play the field game with regional amateur clubs in the spring.

Players use sticks with mesh-and-plastic baskets at one end to pass the ball or shoot at the goal. The ball movement and offensive plays resemble moves from both basketball and hockey. The outdoor game, though physical, is much less violent than in box lacrosse, where heavy stick and body checks come at a breakneck pace. 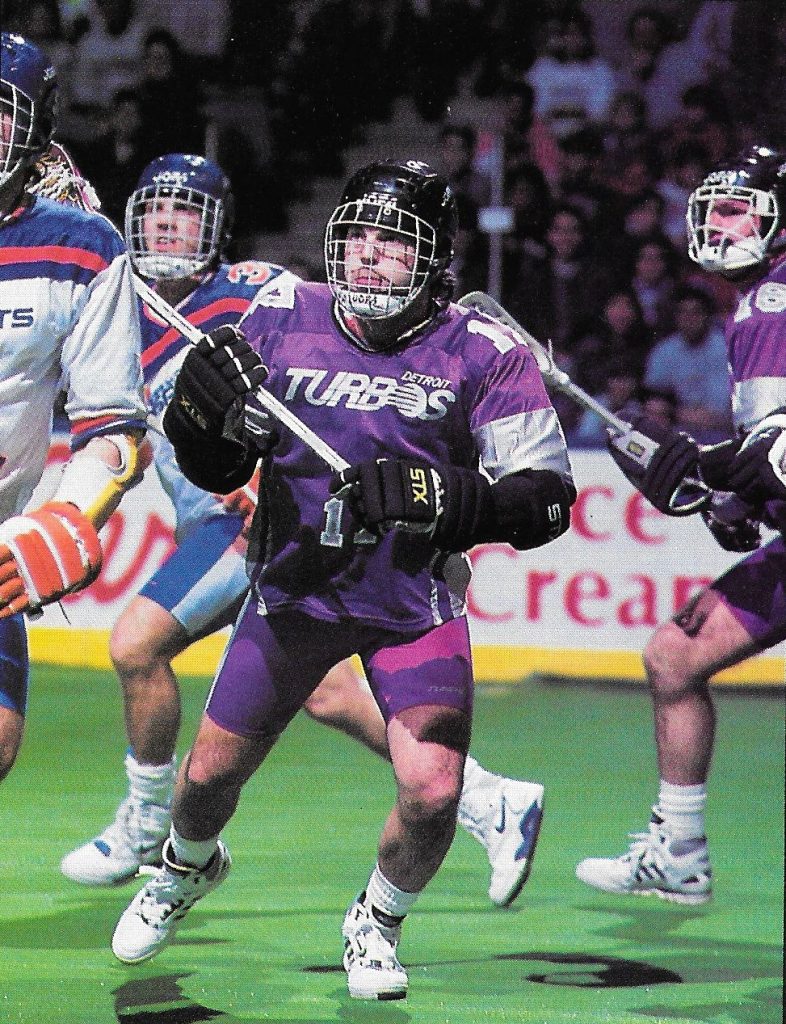 The indoor game wasn’t developed until the 1930s, when it germinated in Canadian hockey arenas. Arena owners had nothing to do during the off-season, when they had no ice, so they developed the game to lure lacrosse players – and hence revenues – to their facilities. The game is lacrosse “played in a box,” referring, depending on the source, to either playing indoors or to the hockey-like boards that surround the playing surface. The game is played on artificial turf or carpet.

Steve Stenersen, executive director of the National Lacrosse Foundation, says the Canadian promoters helped popularize the game with a hoax. Telling lacrosse players how box lacrosse had become popular in Australia, they convinced Canadian players to try the game. By the time the lacrosse establishment in both Canada and the United States discovered that the Australians had neither seen nor heard of box lacrosse, the game was spreading like wildfire across Canada.

Until the MILL was formed, the sport stayed north of the border, with only a few forays into the United States, largely in the form of amateur leagues populated by players who – like members of the Wings – were raised on the field version of the game. Wings coach Dave Evans, a veteran of the many Canadian leagues, says the MILL teams are equal to the best teams in Canada, “but for a long time, the Canadians still played better.”

Box lacrosse is similar to hockey in terms of numbers of players, rules and the speed of the game. The players, however, appear much more vulnerable than heavily padded pucksters; box lacrosse players – with the exception of the goalies – wear thin uniforms and almost no protection for their legs. Arm and shoulder pads are common, and helmets are a must. But the often-violent nature of the game usually leaves onlookers with the impression that “these guys must be crazy.” 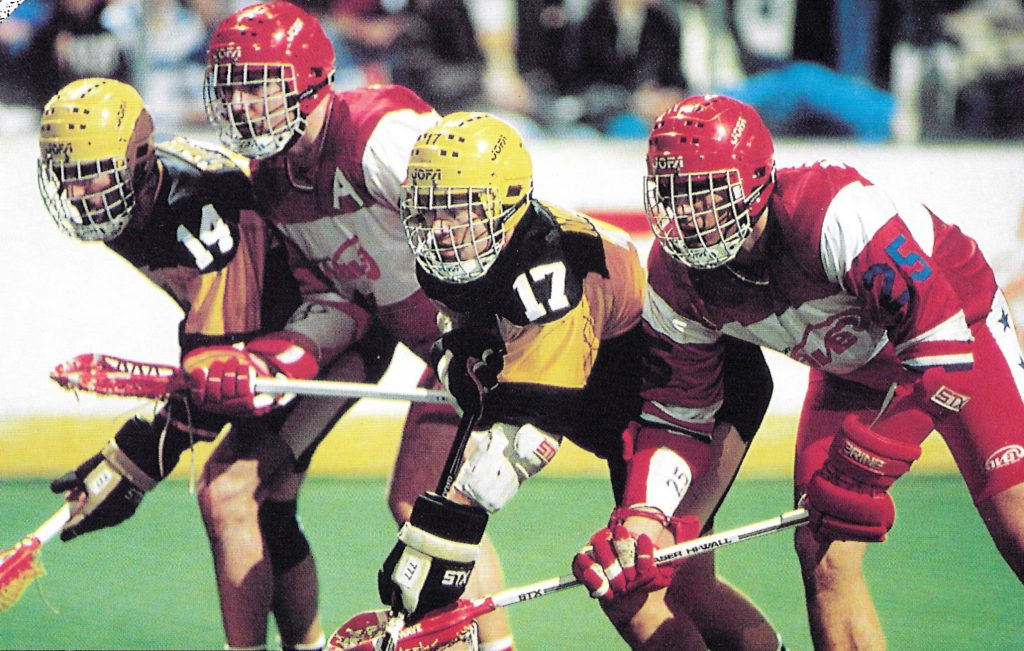 That level of insanity is multiplied by a look behind the scenes. To all outward appearances – to the people who never see five players piling out of a car after a long drive, or who don’t see the player fold an expensive business suit into a gym bag before picking up the stick for practice – box lacrosse looks like any other big-time sport. Ticket prices run up to $15 per game, players wear nice uniforms and play in big arenas.

Another unusual point about the Major Indoor Lacrosse League is player salaries, which are based on a set scale: $100 per game for a rookie, $150 for a second-year player and $200 for third-year veterans. Over the eight-game regular season schedule, the league’s veteran superstars will make no more than $1,600; there is no pay differential for goal-scorers or reserves.

All that for the opportunity to lead a life that is less than normal. An average practice day starts when the player goes to work, usually early in order to get away before the end of the day. The Philadelphia players then car-pool for the ride to Edgewood – roughly 30 miles north of Baltimore – change, practice and ride home. Since locker-room facilities at the Athletic Center are limited, many of the players go home in their sweaty clothes.

Even if practice is short – say, an hour – the drive makes it last three to four hours.

The commitment goes beyond the time given up to the game. Many players have refused to take jobs that would lead them away from the area, to a city where they could not play. “It’s tough to do when you’ve got a 90-minute drive,” says one Wings player. “But to drive a lot further for a few extra bucks makes it almost impossible.” 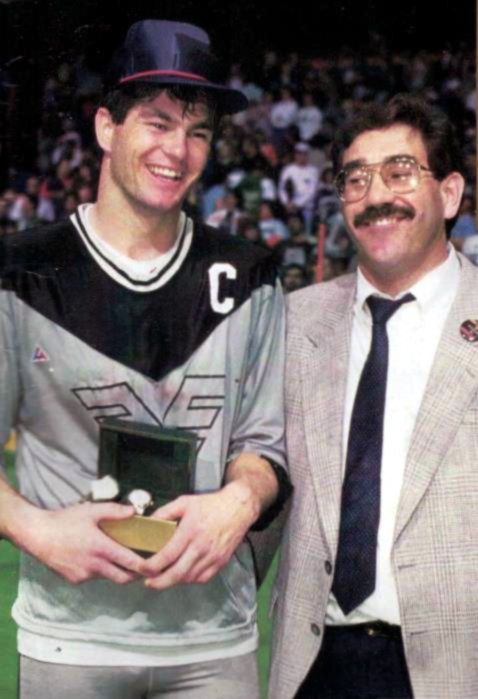 Sometimes, the game even becomes a strain on personal relationships. “It can create an awkward situation,” says Evans, whose girlfriend stayed behind in his native Vancouver when he came to the United States to coach.

Gary Martin, a former Penn State All-American and returning member of the Wings, missed his second anniversary to attend the team meeting. He says his wife understands. Page – who is looking for a new job that will keep him in the area – says the same for his new wife. Both – like all of the Wings who hail from the Philadelphia area – have a 90-minute ride to practice in Maryland.

“I sacrifice because I love the game,” says Martin. “Anyone who plays a sport wants to play at the top level of their game, no matter what it takes. Playing on the team last year, in front of the big crowds, was a great experience. Even though there are times when I wonder if it’s worth it, I never have a second thought once I put my helmet on and go out to play.”

“Lacrosse players are a different breed of cat,” says Evans, the Wings’ coach, who takes the winter away from his native Vancouver to coach the team. “It costs me money to come here; I could do better if I stayed home. But everyone who loves this game is willing to give things up.” 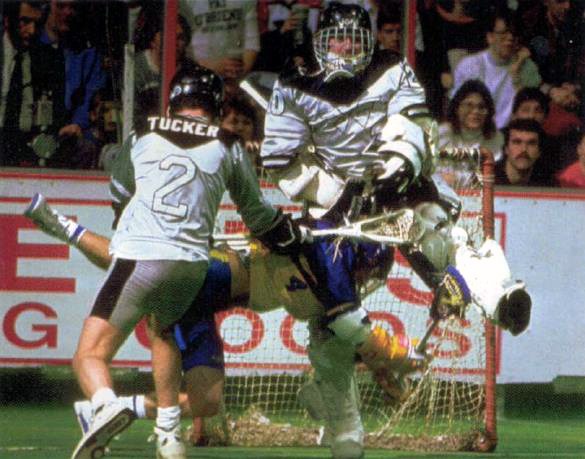 Of course, the players do gain a great deal from the league. For starters, they get the ego boost that comes with being a professional athlete, and the exposure carries over to when they play on club teams. In addition, some players use their position on the team to help with their jobs. Martin, for example, says that he helps clients get tickets, and that their interest is increased by his presence on the floor. His employer, Unisys Corp., “is very encouraging about it. I think they like it that I am on the team.”

“This is a professional league in that the players get paid, but the infrastructure of the team and the way it operates is very much like a club team,” says Evans. “It’s more loose and friendly.

“There are other sports that are more glamorous and high profile, but you don’t have the commitment. I think the effort put forth by the players is one of the advantages to being a semi-pro pro league. If players were more worried about salary and less about playing the game, I think the league would lose some of its character.”

The 1989 Wings have been building their own character in the Maryland practice facility. Cuts started after just three practices, and Evans picked his team by Thanksgiving. The Wings won three scrimmages – including a victory over Detroit despite being significantly outnumbered because of to player absences – and, on paper, appear to have a legitimate shot at winning the title. Last year, the club finished with a 3-5 record, but four of the five losses were in one-goal games.

Preliminary results at the gate have been encouraging too, as Spectrum officials say that season-ticket sales are up substantially from a year ago.

“For lacrosse players and people who have been involved in the game as long as I have, the Wings are a labor of love,” says Evans. “I don’t think we (coaches and players) do it for the salaries or recognition. That’s all nice, but I think we do it because this is fun – a lot of fun.”