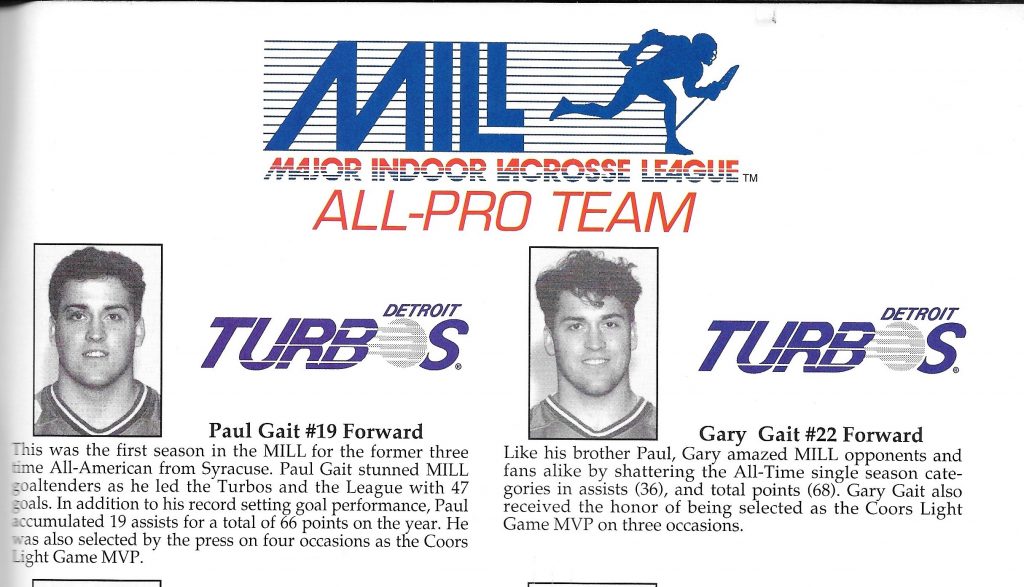 “[MILL players] have to play somewhere close to where they live,” said MILL senior vice president Russ Cline, who founded the league with Chris Fritz in 1987. “That’s why we’re taking the Gaits out of Detroit. We don’t want players flying in [from other cities] just to play games.”

The Gaits, who are considered among the best lacrosse players in the world, were “drafted” by the Detroit Turbos when they entered the league in 1991. At the time, the twins were living in Syracuse, where they had led the Orangemen to three straight NCAA Division I championships from 1988-90. 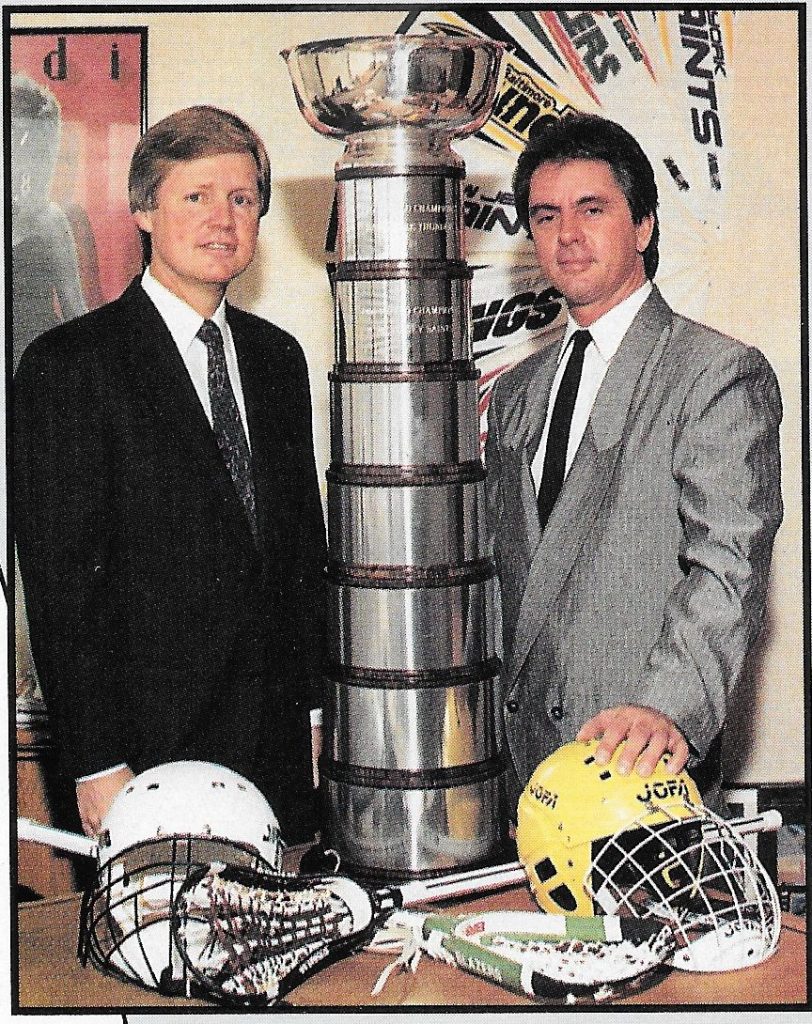 But today, Gary Gait lives and works in Baltimore as a representative for STX lacrosse equipment and as director of Gait Brothers Lacrosse Camp. Paul is moving here next month to continue his work with STX and the camp.

“Paul and I would definitely like to play in Baltimore,” Gary Gait said. “I’m pretty sure it will happen, but I can’t say for sure till it’s official.”

“There will be a tremendous amount of dialogue [on the Gaits] between the owners and general managers,” said Cline from the league’s headquarters in Kansas City, Mo. “We want to do what’s right for the league and the Gaits. Paul and Gary are among the most exciting players in the league. Their name, what they did in college, are tremendous assets for this league.” 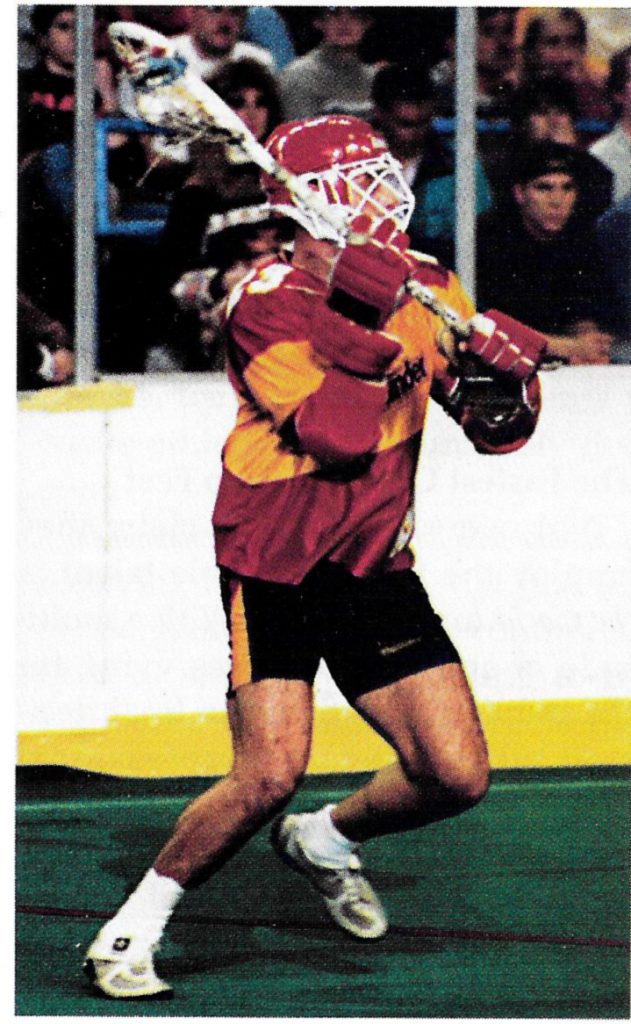 Another factor is that the Thunder, along with Detroit and Philadelphia, is an STX-sponsored team. Playing for the Thunder would allow the Gaits to keep their endorsement contract with the company.

Thunder general manager Darrell Russell could not help speculating on what it would mean for the team to get the Gaits.

“I would take one or both of them,” said Russell, a Maryland District Court judge. “I think it would mean a real burst of energy for us now that [leading scorer] Rick Sowell has retired. [Fritz and Cline] are pretty democratic. They’ll allow all seven GMs to decide where to place [the Gaits]. We’re not the NBA or the NFL, so we need to do what’s best for the league as far as survival.

“Playing in Baltimore would help the league the most,” Russell said. “Philadelphia sells out without them, but Baltimore could really get a boost [in attendance] with them. 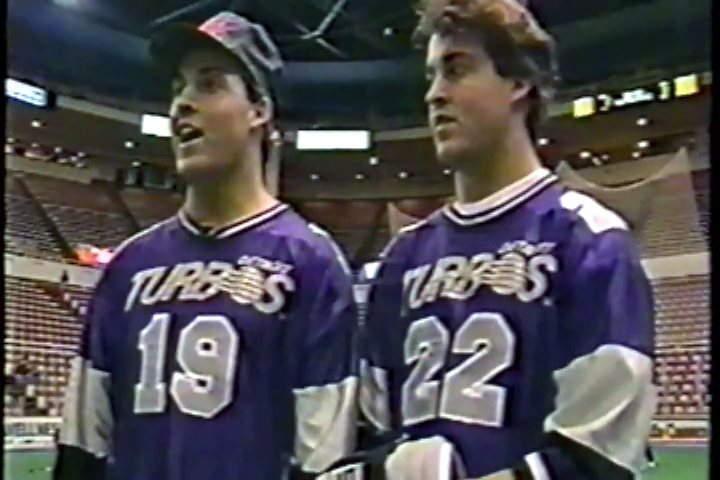 “[The Gaits’] playing in Detroit didn’t have a big effect because there isn’t a strong lacrosse base there. [In Detroit] they get most of their players from Canada. But in Baltimore, it would really have an effect. Without the Gaits, we averaged about 9,500 [at the Baltimore Arena], but with them, I think we could sell out all 12,000 seats.”

Last year, there were 11,063 tickets sold for a regular-season game against the Turbos at the Arena, and in 1991, Detroit averaged 10,393 in two games in Baltimore.

Turbos general manager Tom Wright could not be reached for comment.ndoor lacrosse’s two biggest stars soon may be shining full time in Baltimore.