Skip to content
Home
/
Defeat of Quebecers 19-12 at the Forum…Michel Blanchard bows out!

Defeat of Quebecers 19-12 at the Forum…Michel Blanchard bows out! 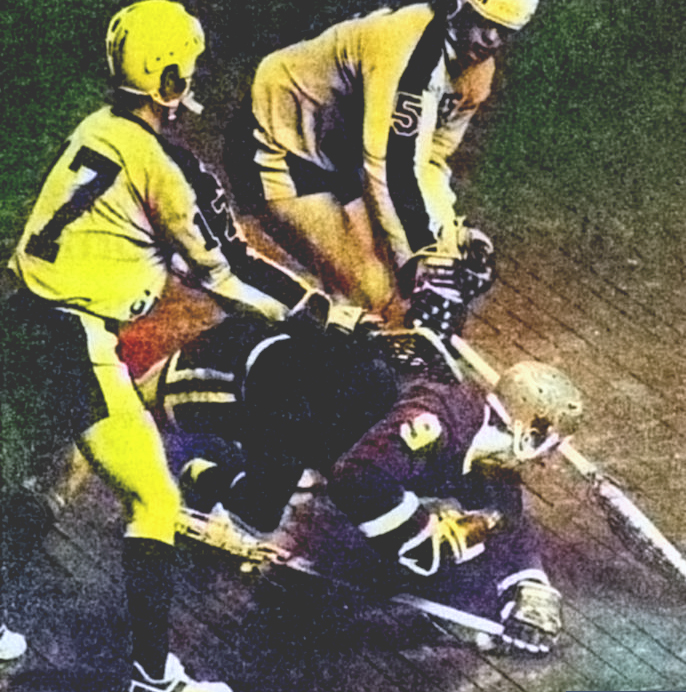 The story of the game ... John Davis (9) forced to keep the ball too long because his teammates are not discovered and who finally lost against two opponents, Jan Magee (5) and Brian Keegan (17).

The Montreal Quebecers were outclassed for the third time in a row. this time by 19-12 against the Rochester Griffins last night at the Montreal Forum, and, much more seriously, lacrosse, probably lost his war in Quebec, when Michel Blanchard announced a few minutes after the game that he had just played his last game with the team.

Blanchard’s decision, one of only two true Quebecers who remained with the team, immediately followed this comment by instructor Bill Bradley to the newspaper lists: “Blanchard is not of caliber.” Bradley then responded to a scribe who had asked him why Blanchard had not reappeared on the game after his outing warmly applauded by the crowd some five minutes before the end of the first engagement.

When the journalists reported his instructor’s words to Blanchard, Blanchard simply announced that Quebecers were done for him. “I don’t have much choice, do I?” he asked reporters. “If my own instructor thinks I’m not strong enough for his team, I don’t have any business here!”

John Ferguson. general manager and co-owner of the team, then returned to the players’ locker room. A journalist had just told him about the incident and Blanchard’s reaction. Ferguson beckoned Blanchard to follow him, locked himself with him in the instructor’s office, and was told of the incident again.

“What was his reaction?” reporters said as they watched Ferguson rush out of the Forum, pale as death. Blanchard replied that Fergy had only passed one remark “He (Bradley) didn’t say that! (Bradley didn’t say that!) ” Blanchard’s decision will appear to be a heavy consequence for the 4,194 spectators (house figure) who attended yesterday’s match.

Frustrated to see him confined to the end of the bench after a flawless performance (except perhaps a penalty incurred at the beginning of the match… without harm for the team for that matter), the spectators chanted “We want Blanchard” no less than four times in the third period, with no regard for what was happening on the game. Many felt that the case could have gone wrong without the organist’s pre-spirit.

Some 5,000 fans who witnessed last Wednesday night’s inaugural victory were not at the Forum yesterday. It remains to be seen now how many of yesterday’s 4,000 fans will be at the next meeting of Quebecers following yesterday’s disappointment.

As for the game, well, the Quebecers lost it in the same way as the previous two in Philadelphia and Toronto, by not blocking and forcing the ball’s owner made a throw from distance or attempting a dangerous pass.

The Quebecers conceded three unanswered goals to the Griffins in the final five minutes of the first period and regained their four-goal deficit (7-3). They trailed by 11-9 at the end of the second half. Six consecutive goals from the Griffins early in the third quarter drove them out of the game. The Griffins first increased the score to 12-9 against Bradley’s front row. Then they took advantage of Langley’s nonsense (lost ball as a result of a bad throw). Davis (two opponents delight him the ball), Mitchell out of sort of his goal,” Litzenberger (stupid punishment against an opponent who does not have the ball) to ensure victory.

But even more than their mistakes. it was the impotence of Quebecers in the opposing zone that caused their loss once again. It’s easy to see by analysing each of the 12 goals they’ve scored. Four on power plays, four with reduced formations of 4 to 4, two after throwing 30 feet, one following a breakaway and the last at a numerical disadvantage.

Reached by telephone following his brother Michel’s decision to abandon Quebecers. Yvan Blanchard announced last night that there was no longer any question of him making a comeback with the team. “I had an appointment tomorrow lunchtime (today! with John Ferguson to discuss my eventual return to the game.” he said.

“I left the team eight days ago because. Basically, I found that the real Quebecers did not get justice within the team. “Then I began to doubt myself. A lot of people were begging me to respond to Ferguson’s public invitation and meet him. I was going to flex…

“What just happened confirms my first impression. They said Michel and I were. before, during and after training camp, that we fit very well into the team. “Draw your own conclusions. me. I have no desire to go begging them to show me that the players here are worth at least half a dozen Of the Ontarians and Colombians who are currently playing all their drunk with with Quebecers.” 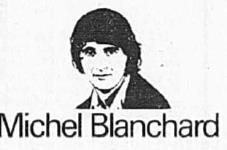 This was added to the article by Michael Blanchard at the time of his relaease from the Quebecois.....needless to say, he wasn't a happy camper.....

$300 of the match. $12,000 for the season, I might not have been offended by the role of “service frog” that instructor Bill Bradley wanted me to play. But this is to ignore any self-respecting Quebecer. If I leave Les Québécois, it is because I have nothing to do in a team led by an instructor who does not understand that a francophone can also play lacrosse well.

I do not have to justify my decision. Those who attended the two matches played at the Forum and the journalists who followed the team on the road know what I am talking about.

If the Pierre Bouchards with the Canadian. Jean-Pierre Bordeleau with the Chicago Black Hawks. Denis Dupéré in Toronto and Gilles Villemure with the New York Rangers (and so on, the list would be too long) can not afford the luxury of updating the petty pettiness of these gentlemen the English, I thank the sky and THE PRESSE that it is not the same me for me.

The seven weeks with The Quebecers of the National Lacrosse League proved beyond a doubt that in professional sport, in teams led by English speakers, with equal value an English-speaking athlete will always be preferred to a Quebecer.

There are a dozen local players who, most certainly, could advantageously replace the Cody, Langley, Taylor, Sheehan and others.

The Telliers, Cusson. Norton (Bradley didn’t think it was right to play him yesterday, despite a brilliant performance the day before in Toronto), Yvan Blanchard. Fortin, Lagueux, Blouin and the two Paquette brothers, Yves and Alain, would make Bill Bradley blush and Quebecers any day of the week.

Bradley arrived in Montreal with players from the senior and junior ranks of British Columbia. It took Serge Loiselle to finish first in the scoring during the training period – to be able to earn a regular position…

Despite a solid performance in the first game: a better performance in Philadelphia (two goals against my line and none against me on the 18 goals scored by the Wings), Bradley did not stop losing my confidence.

In Toronto, despite a faultless first period, I had to watch the other two twentys from the players’ bench. The thing was so obvious that after the match the team’s publicist, Gilles Peloquin, and the co-driver of the DC-3, whose name unfortunately escapes me, came in turn to me to tell me that they found disgusting “the attitude of Bradley and that he was quite clear that there was segregation within the team.”

If I hadn’t been big for Les Québécois, I wouldn’t have needed Bradley and others. I would have left the team from my boss. If I stayed with Les Québécois, it was because I thought that things would eventually work out. And, above all, that I felt able to do so.

In short, all of this is unfortunate. Lacrosse in Montreal does not deserve the welcome given to him by the 4,500 spectators yesterday Evening, when Bradley persisted in trusting his little friends, while the opponent scored 19 times.

Regrettable for all those who have not stopped encouraging me: for my team of journalists who saw in this adventure something a little special; unfortunately for my bosses who have invested a large amount of money in this sport.

But in the face of the sad reality, I doubt very much that all of them will reproach me for anything. “Frog service” even at $12,000? I would have blamed myself all my life.