By Larry Keith for Sports Illustrated

As if we did not have enough to worry about this summer, what with man-eating sharks terrorizing our beaches and lightning bolts zapping the PGA, the National Lacrosse League is back for its second season. The name of the game is really box lacrosse, although it is as unrelated to boxes as football is to footlockers. Rather, it is the indoor version of the field lacrosse played by U.S. colleges and no more violent than rollerball. 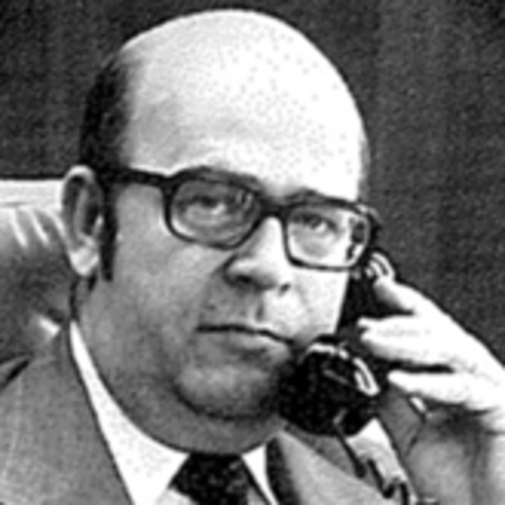 The NLL has a new president, former hockey agent Gerry Patterson, three relocated franchises and an expanded 56-game schedule. But the best thing about the league is not new. It is the superior play of the Maryland Arrows’ Paul Suggate and the Montreal Québécois’ John Davis, two hot shooters from Ontario, who have ranked one-two in scoring for a season and a half. 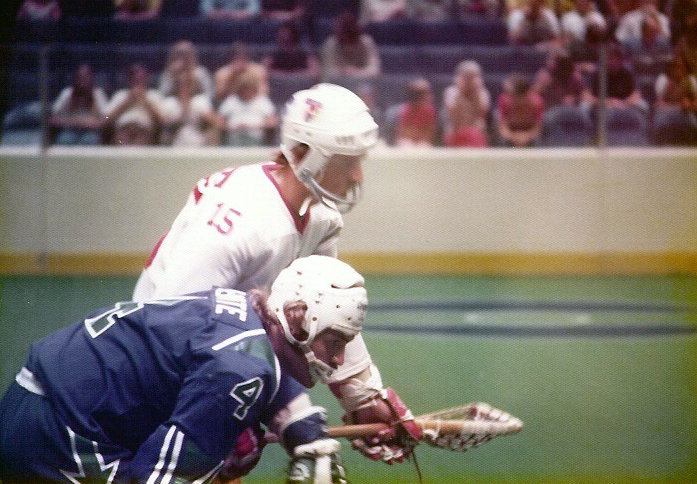 If Suggate and Davis do not dominate as completely as they did last year, it is only because the league has improved overall. Every team has at least a couple of slick stickhandlers who can pass behind their backs and shoot blindly—but accurately—over their shoulders. This also helps to explain why defending champion Long Island, which took the Nations Cup last year playing out of Rochester (N.Y.), has begun only recently to assert itself. The fast-breaking Tomahawks won three times last week to earn a first-place tie with Montreal, which split two games. Maryland, favoring a more controlled attack than the other two, lost its only contest but remained within two points of the leaders. 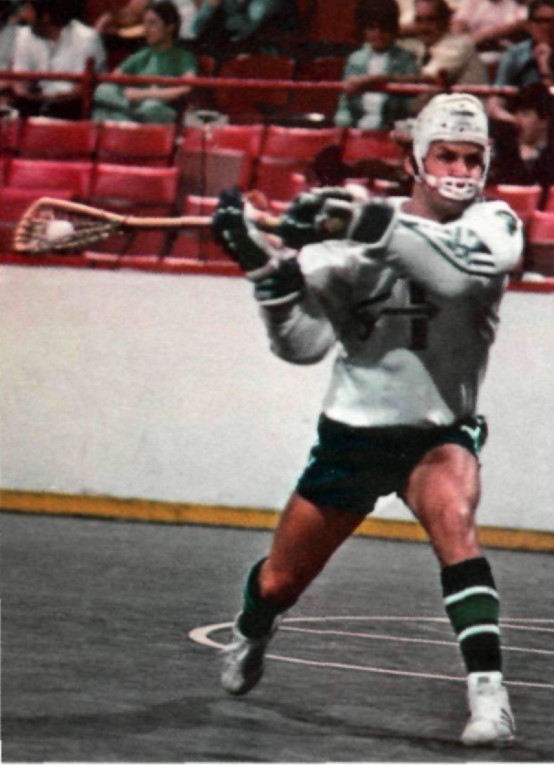 While lacking Long Island’s size and balance, Maryland and Montreal will remain contenders as long as Suggate and Davis continue to show the way. But except for their superiority on the floor, the two Canadians could scarcely be more different. At 5’10” and 190 pounds Suggate is the stronger and faster of the two. He routinely charges the goalkeeper from his left-wing position, scattering whatever bodies happen to be in his path. Davis is more a stylist, the small man—5’8″, 155 pounds—in the middle who can whip a deft pass or hurl a rifle shot at the goalie’s feet. “John reminds me of Bob Cousy,” says Montreal Coach Jim Bishop. “Suggate is more like Jimmy Brown.”

The differences extend beyond playing styles. Davis, the 31-year-old veteran who looks every bit of his age, is conservative in manner and dress. Suggate, six years younger, is hip and flamboyant. In their personalities, Davis symbolizes where pro lacrosse has been, and Suggate where it hopes it is going. Although the NLL’s attendance averages 5,600 a game, a healthy figure for a new league, it has not yet gained wide support among non-lacrosse-oriented sports enthusiasts in the Northeastern U.S., where four NLL teams are based and where the league must build a strong following if it is to become a long-term success.

Davis started taking the game seriously when he was six years old. As a kid in Peterborough, Ontario, the hotbed of Canadian lacrosse, he sometimes would play all alone 12 hours a day. And the results of this persistence are reflected in his appearance. Despite his slight physique, he has the forearms of a laborer. His thin face is scarred by dozens of stitches. He once suffered a concussion and played again three days later after telling his coach the doctor had approved, which he had not. Davis believes that showing pain, especially after an opponent has landed a perfectly legal swat with his stick, is to admit vulnerability. Nor does he retaliate after fouls, even those that draw blood. “Stitches don’t bother me,” he says. “Six of them is a small price to pay for a couple of goals while your opponent is shorthanded.” 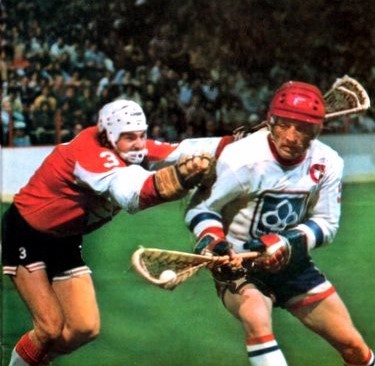 After a game, even one on the road when the Québécois’ plane returns to Montreal in the early-morning hours, Davis will go to the South Sea Restaurant and drink Labatt beer for hours. Only then is he relaxed enough to order his favorite shrimp or rib dish. If he wants to stay until dawn, South Seas Owner Chuck McDermaid will keep the place open. McDermaid displays Davis’ picture on the wall and one of his many trophies on the bar. Perhaps the only more ardent lacrosse fan in Canada is the prison inmate who already has requested two Montreal season tickets for 1985, when he will be released. 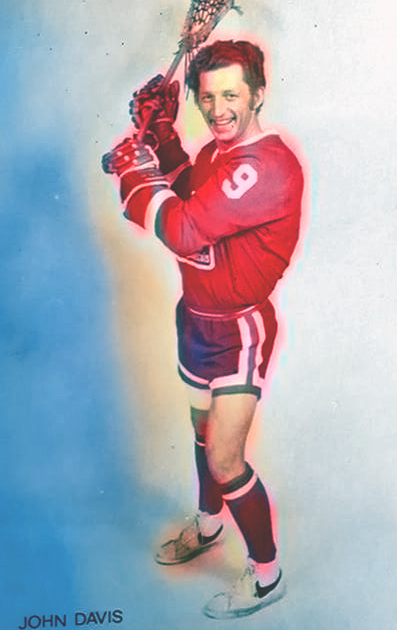 Davis played at every level of lacrosse before the NLL took the sport out of the provinces and put it into major cities. Seven years ago there was another pro league that paid $50 a game. When it failed, Davis was back selling cars and playing semipro for $14 a night.

“Professional lacrosse has always been my dream,” he says. “I just wish it had come along sooner. I think of myself as a pioneer. The big money will come sometime later, perhaps when my three sons play. The important thing now is that we have a league.” 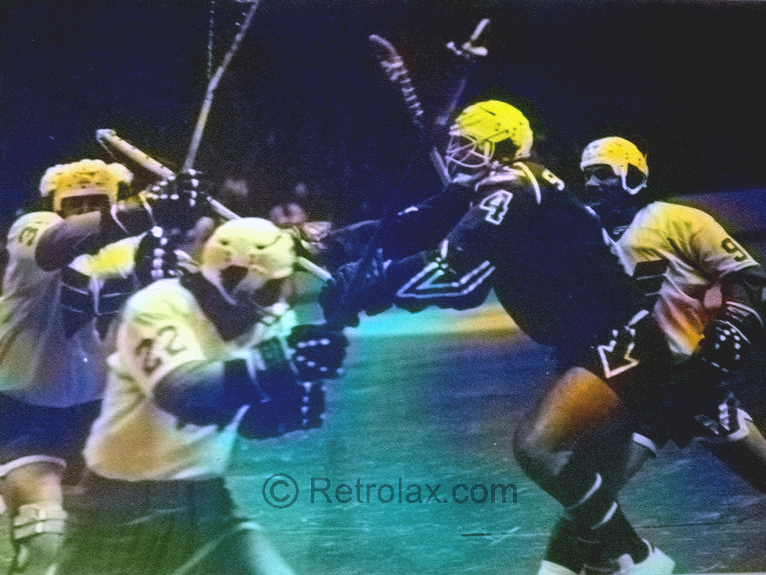 Suggate makes $30,000, twice Davis’ salary and three times the league average, though it was only a few years ago that he began taking the game seriously. “In the juniors I was out for a good time,” he says. With his long hair and mustache and his roguish, self-assured manner, it is difficult to imagine him doing anything else.

Suggate’s scoring championship last season was the first for him at any level, and it came in overwhelming fashion: 239 points to Davis’ 183. “I was great, by far the best in the league,” he says. “But not now. Maybe I’ve mellowed because of my success. I’ve been asking myself what the hell’s wrong.”

Most probably, nothing is. He still leads the NLL in total points (128 to Davis’ 123), and his lower scoring is mostly the result of his teammates’ contributing more, a fact that does not make Suggate particularly happy.

“Maybe I am jealous,” he casually admits. “There’s no way I’d let one of my teammates beat me for the scoring title. If it got down to the last play of the year, and I needed to score to win, I wouldn’t let anyone shoot but me.”