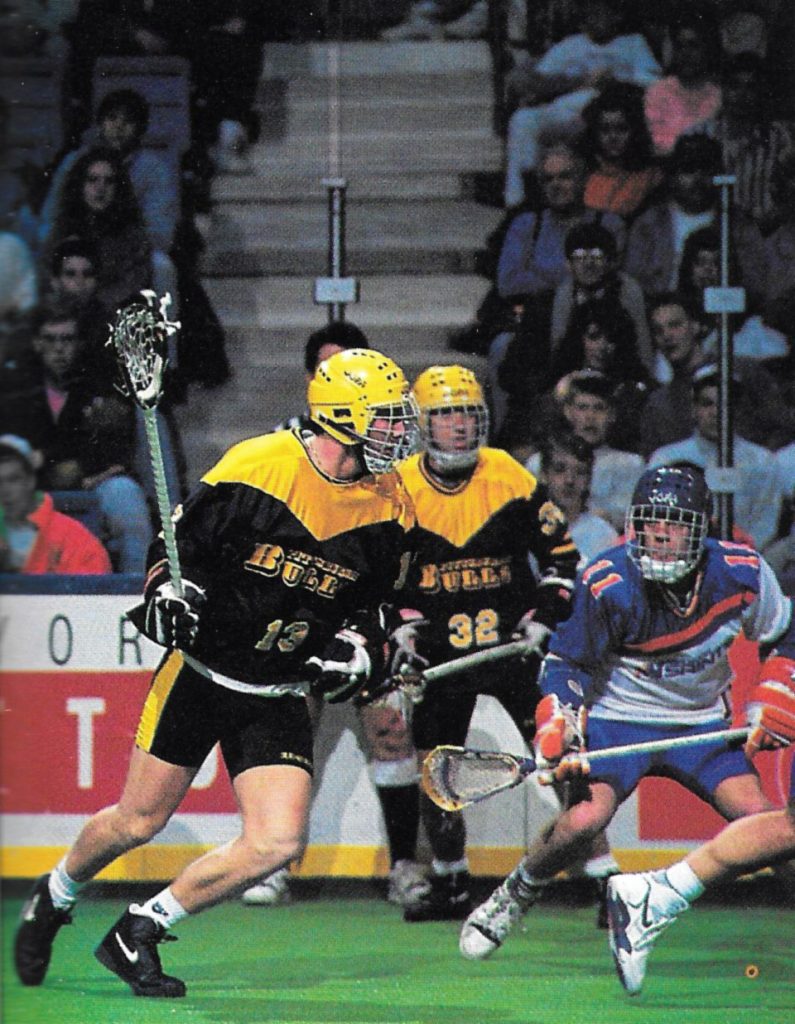 The attack by old friends and former lacrosse colleagues came at the Thunder by way of Pittsburgh.

The Pittsburgh Bulls, their squad loaded with men who played college lacrosse in Baltimore, defeated the Thunder, 16-9, in an Major Indoor Lacrosse League game last night before 8,114 at the Baltimore Arena.

It was the first win for the Bulls since March 7, 1992, when they stunned the Philadelphia Wings. The Bulls are 1-6 and will finish their season tomorrow at Philadelphia.

The loss left the Thunder with a final regular-season record of 2-6.

The former Baltimore college players came at the Thunder in a steady stream.

Lindsay Dixon, an MILL rookie out of Towson State and the Bulls’ goals leader with 16, had three goals. Jeff Wills and Dave Pietramala, both of Johns Hopkins, and Mark Gold of UMBC each had two. Steve Marohl of UMBC and John Blatchley of Towson State had one apiece.

“They’ll be sky high, coming back to play here,” Thunder coach John Stewart had said before the game.

He was right. The Bulls jumped to a 6-2 lead after one quarter and a 10-5 lead at halftime.

In the relatively calm third quarter, Pittsburgh outscored the Thunder, 2-1, to raise its lead to 12-6.

“They won on heart,” Thunder general manager Darrell Russell said. “The stats were about even, but they wanted it more.”

The Thunder, which came into the game as the worst defensive team in the MILL with an average goals yield of 18-plus, had the small consolation of keeping Pittsburgh under that total.

“We played like we didn’t know each other,” said Dan Britton, a fourth-year MILL player. “Unlike when we beat Pittsburgh two weeks ago, we had no hustle, heart, desire, passion. No team unity or motivation.”

In the first half, the winless Bulls bore only faint resemblance to the team that lost to the Thunder 16-14, on Feb. 27.

Manos provided a settling influence for a while, limiting the Bulls to two goals the rest of the period.

The Thunder is idle until March 28 at 2 p.m. when it will visit the New York Saints in the first round of the American Division playoffs. The winner will meet the Philadelphia Wings, the regular-season winner, for the division title April 3 at 8 p.m. at the Spectrum in Philadelphia.

NOTES: Thunder coach John Stewart calls them his “loyal and faithful,” the players who practice all season but seldom play in games. Eighteen of the squad’s 25 players dress; the others sit. But they are needed for workouts, since 22 players are required for a good practice. The players who sat out last night: Matt Lewandowski, Travis Boone, Steve Scaramuzzino, Tim Speers, Gary Miller, Dave Slomkowski and Matt Kerwick.