The Tomahawks serve as a lesson to Quebeckers 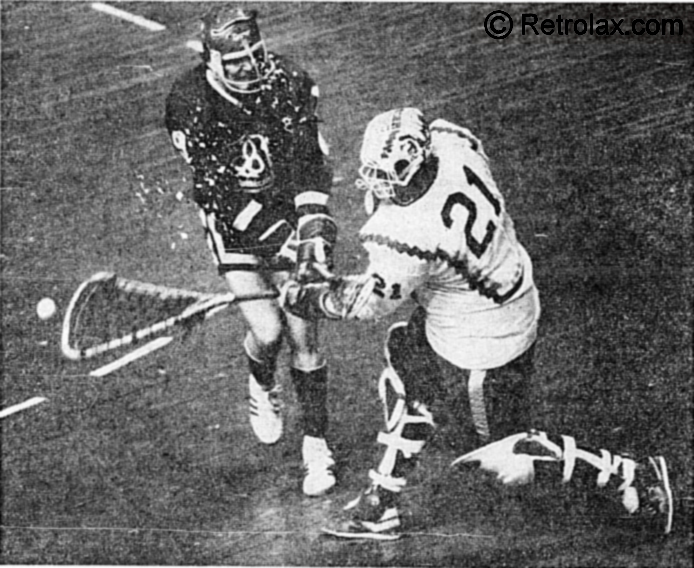 Whatever the gesture of Dale McKenzie of the Quebecers, did not slow down the excellent Toronto Tomahawks goalkeeper, Bob McCready, the latter having been chosen the star of last night's match at the Forum. The Quebeckers were defeated 16-12.

If John Ferguson’s crises are not as famous as those of Toe Blake, it’s just that Fergy is just starting out as an instructor.

But it will come. Give him time.

Blake’s best shows did not match the one Fergy gave last night, after the bitter 16-12 loss to his Quebecers at the hands of the Toronto Tomahawks.

Fergy raged, screamed, walked so fast in that tiny room that serves as his office that the scribes were crushed in the four corners of the room probably for fear of being overthrown.

Fergy ‘did not spill anyone. By the way, he responded very politely to the scribes who ventured to interrupt his charge against the officials. The answer given, Fergy resumed the tirade where he left it so that all his players, all the press in Montreal and all the fans who had lingered in the Forum now know that Fergy does not like officials any more than the slacker players on the night of glaring discomfiture.

And that he can shout much louder than Toe Blake has ever been able to, even in his best dreams.

Of course, the scribes, even the bravest ones, spent a lot less time in the cloakroom of Quebeckers than usual, asking Ferguson much less questions, which, I strongly suspect, was the very object of the dazzling verbal output.

Fergy chose a bad night and a bad example to attack Officials. The five-minute penalty awarded to Ron Liscombe early in the third period was well deserved * and did not change the pace of the game. Liscombe has reached a rival in the face, as it often happens, and his victim. Jim Quigg. was so deeply cut under the right eye that the four stitches that were made to him did not succeed in closing the wound. While it is true that the officials took about 10 seconds to report the offense, it must be added that the Torontonians did not count in the absence of the big Montreal number 12.

Fergy’s anger was worth the trip but it did not allow the journalists to penetrate some of the mysteries in which Quebecers have waded since the first game of the season.

It’s a shame because yesterday’s classic lacrosse was all right. Lady Chance had taken leave and the best team won, by the appropriate margin, four goals.

It would have been just the right time, for example, to ask Ferguson if he was not “unduly” using those he had chosen for “his players (the experience”).

Even by subtracting Quebeckers ‘presences from the field while the Tomahawks’ power play was going on, we come to the sad picture of Davis 8, Tasker 7, Litzenberger, Osinchuck, McKenzie and Bradley 5.

It would have been a great opportunity to point out to Ferguson that the best instructor in the history of indoor lacrosse, his rival yesterday, Jim Bishop, still uses three EQUAL-TIME EQUATIONS ON THE FIELD.

It would have been an opportunity to point out that the Quebecers’ power play, because of the fatigue of the players, the non-use of the “creasemen” Gord Floyd and Jim Lynch and the weakness of Bill Sheehan’s shot, did not The Tomahawks have three goals in four power plays last night, Quebeckers none in three and Bob McCready, the Toronto goaltender, was talking about a mid-power play that “should be better!”

All these questions were not put to Ferguson last night. There are limits to the bravery and anger of Fergy- was so beautiful …

But the former pupil of Toe Blake will still have to wonder about it soon. Quebeckers’ rivals are working more and more like machines, (“give me a month!” Bishop had said at the beginning of the campaign) and against Bishop’s lacrosse machines, all the rage and all the Knute Rockne of the earth are not enough.

A little more than 8,000 spectators and we find nothing better to do than to know our worst game of the season. In the cloakroom, nothing very pleasant. As soon as we got back, there was Fergie who gave us a purple anger; others who would have preferred never to have touched a stick of their life and a bunch of players, mostly silent, who hastened to do their little things and slip away.

… that’s what I was getting ready to do. But a sprained ankle forced me to receive some care.

She is curious about how athletes perform after a game. If the victory was sweet, they never stop to change and they like to di’scute suddenly with journalists and visitors.

Very few of them, however, do not like to linger after a particularly difficult match. Everyone is a little responsible for defeat. A collective feminine paranoia. We do not want to talk, not even to his teammates and that’s when it is recommended to keep quiet. What would be the point of fanning the fire?

We lost yesterday because we did not work enough. We sat on our lead of 6-2, acquired in the first 20 and we told ourselves that a team that had been defeated at home can not come from behind .. At the end of the second period, we were pulling from the back, 10-9.

Even more disappointed to have lost two points in the standings and also a great opportunity to stand alone in second place, the players were especially sad not to have managed to exhibit all their talent in front of this very good assistance which did not ask the fact , only that.