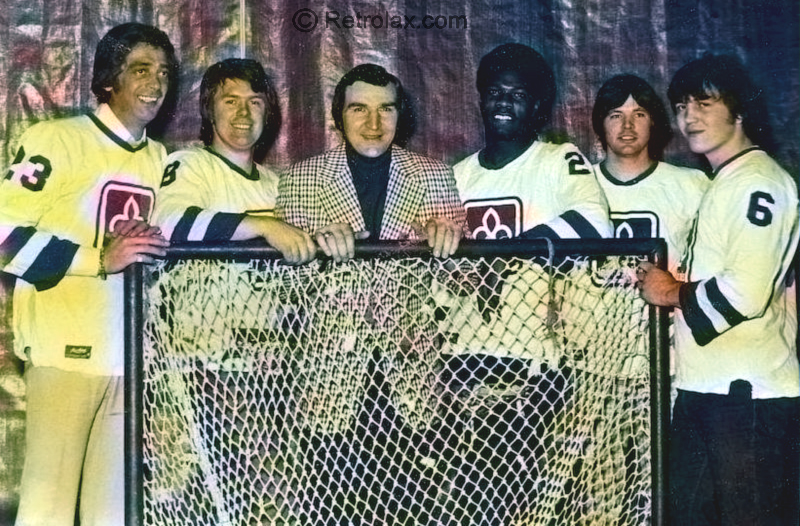 John Ferguson was a betting man among his many and varied activities. As General Manager of the Montreal Quebecois in 1974 he quietly made a bet with an untested aspiring goaltender named Irving Dubrovsky who was doing some promotional work for the team. Irving  was like a modern day snake oil salesman, but very likeable.

The bet was that he (Irving) could make the team on his own merit during tryouts early in the first year training camp.

(Irving is on the far left of the photo with David Litzenberger, Fergy, John Sheffield, Dale Mackenzie and Gary Brezany).

The afternoon this picture was taken, Irving asked John Sheffield and myself to give him some pointers and take some shots on him for practice as a goaltender. Sheffield and I were not aware of the “wager” he had made with Fergy for an undisclosed amount (rumored to be in the thousands).

The team had an indoor practice facility on Dresden Avenue in North Montreal. Anxious to see what Mr. Dubrovsky had to show us for talent we got into our workout duds and began taking shots. For over an hour we started easy and built up pace and variety from underhand,  overhand, bounce, straight and backhand shots.

Irving was lousy but enthusiastic and never complained. He stood in and gave it a good effort. When we stopped and suggested it was time for a beer, he agreed immediately.
Taking off our gear for a shower we were shocked to see Irving hadn’t put on a chest protector and his unprotected body was absolutely covered with red blotches starting to turn colors!

No wonder the shots hitting him in the chest made a different sound than we were used to Johnny noted. Irving bruised up like a rotten banana and moved  delicately for the next week. He didn’t make the cut and lost the bet with Fergy who laughed like hell when we told him the story.