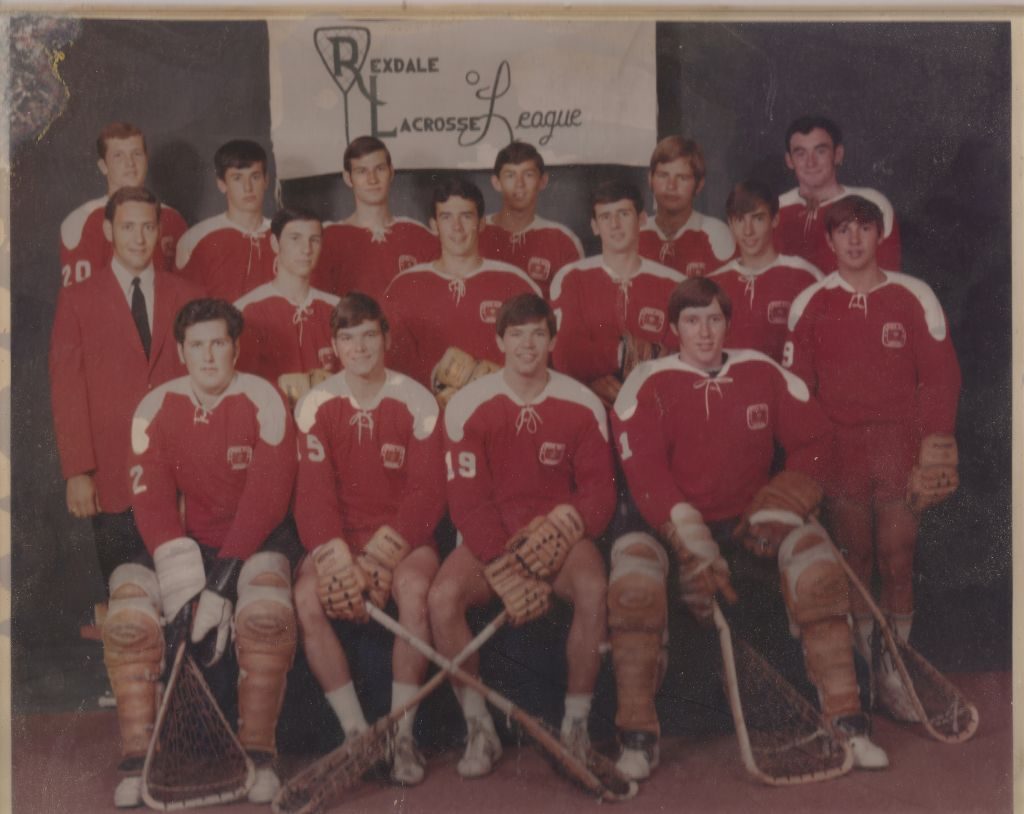 The first ever Canada Games was held in Halifax, Nova Scotia – August 1969. Provincial teams competed against each other for National Supremacy. Ontario lacrosse was represented by Rexdale Warriors.
In the qualifying tournament final game against Jim Bishops’ heavily favored  Junior B Green Gaels, many of his players were brought down from Jr A ranks to ensure a victory.
As the article states, Rexdale was down 2 goals going into the 3rd period.
I was hacked by Terry Rowland in the end of the second period and my nose was literally hanging by a thread of skin and had to leave for medical attention.

Fortunately a hospital was nearby and even more luckily a plastic surgeon was available. He replaced my nose and I returned to the game to find us down by 2 goals in the middle of the 3rd period.
Adrenalin and rest had given me energy and with a Hockey mask on my face I was able to score a goal and get the team back on track. Assisting on another two goals we tied and then pulled ahead to win the opportunity to represent Ontario.
In the Canada Games that August we won the Silver medal in a close game against BC.
Three of the players on that Rexdale team went on to play Professionally in the NLL.
Jim Quigg, Bill Nunn and myself.
————————————————————————————————————————————————

Rexdale Jr, B’s ‘will be Ontario lacrosse hopes in the Canada Summer Games to be staged in Halifax, commencing August 19th, The Rexdale squad, coached by Bob English and man­aged by Al Aston, earned the right to make the trip by defeating Oshawa 14-12 in the final game of a four- day round robin tournament, held at North Toronto Arena.

Seventeen teams commenced the round robin on June 14th and 15th and the survivors returned to the scene last weekend,. Rexdale gained the quarter finals with a 20-8 victory over Niagara Falls two weeks ago.

They played three games last weekend, edging Corn­wall 17-14 in the quarter finals, defeating Ottawa 12- 5 in the semi-finals and then picking up the big vic­tory against Oshawa.
The victory was all the sweeter because of the fact that Oshawa were heavy favorites to win the tourna­ment and were also well in front m regular league play, having won seven and tied one of their first nine games. Rexdale was seven points back of Oshawa in the league standings.

Rexdale captured the game the hard way, com­ing from behind a three goal deficit in the final nine minutes to score five unanswered goals and that was sweeter because of the fact that Oshawa were heavy favorites to win the tourna­ment and were also well in front in regular league play, having won seven and tied one of their first nine games. Rexdale was seven points back of Oshawa in the league standings.

Rexdale captured the game the hard way, com­ing from behind a three goal deficit in the final nine minutes to score five unanswered goals and that was enough to give them, the championship and the big prize of a trip to the east coast.

After the game, Aston stated: “Now that we have earned the privilege of going to Halifax, our work has just begun. We have to arrange holidays for the players, start a fund raising campaign to help defray expenses that are not norm­ally covered in Summer Game grants and generally we have many minor to try and take care of.” He concluded: “We only hope that the good people of Rexdale will be able to assist us when we call on them.”

Coach Bob English re­fused to single out. any player for special mention with the exception of net- minder Rick Bradley, lie Baid: “It would be unfair to say our championship was the work of any one player. This was a solid team effort but we did get some superb goaltending from Rick Bradley and he should be a coming star of the future “

Rexdale led 8-4 at the end of the first period but let down badly in the sec’ ond as Oshawa outscored them 6-1 to take over a 1fl-9 lead and then added two more goals in the early stages of the final period liefore Rexdale finally found the range which ultimately resulted in live goals.